Paul Ciolino is a life long resident of Chicago. He was the first and only expert in Homicide Investigation hired by 48 Hours, and CBS News, as an on air personality. Over the past 25 years, he has appeared in hundreds of news program on every major cable and television network in both the United States and Canada. His shows on CBS’s 48 Hours averaged 6.5 million viewers per episode. He currently hosts the popular, The PoPo Report on WLS AM 890 in Chicago. It is a weekly radio show that covers criminal justice issues in America. 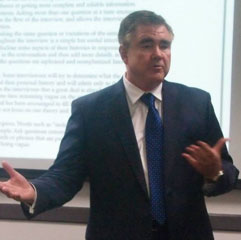 Paul is also a veteran of the U.S. Army. He served as a Sergeant in the combat arm of the military police where was a member of the first civilian trained SWAT team. He went on to become the lead homicide and child molestation investigator  for the Department of Children and Family Services in the State of Illinois. During that time, he obtained over 200 written confessions in homicides and child related sexual assaults.

Paul operated as a licensed private investigator in Illinois, Louisiana. Wisconsin, Iowa, and Florida over the course of a thirty five year career, during which he investigated hundreds of murders and other violent felonies. Some of his investigations assisted in the historic emptying of the Illinois death row population in 2003. His work was directly responsible for gaining the release of five death row inmates, and five more serving life sentences. As a direct result of a stunning videotaped confession he obtained in a 1982 murder case an inmate on death row who came within 48 hours of execution was exonerated and freed. When Illinois Governor George Ryan emptied death row he mentioned Ciolino by name as one of his main reasons for doing so.

Paul has literally worked or directly supervised thousands of fraud cases for government and corporate entities. He developed the first fraud program for the Illinois  Department of Public Aide which resulted in a savings of over twenty-million dollars in three years. He has been involved in hundreds of criminal and fraud cases for Fortune 100 companies to include gas, oil, pharmaceutical, banking, and legal communities. He has evaluated and profiled potentially dangerous individuals who have threatened and or physically harmed key employee personnel.

Paul was the first and remains the only private investigator to receive board certification as a Criminal Profiler from the Academy of Behavioral Profiling within the International Association of Forensic Criminologists (IAFC). Criminal Profilers provide advanced instruction in the application of evidence based criminal profiling techniques (aka Behavioral Evidence Analysis) to unsolved criminal cases, with the anticipation of eventual courtroom testimony.

Paul has authored or co-authored five professional textbooks, a Wrongful Conviction investigative guide and a Biography. They are: